Where Modern Dentistry and a Soft touch meet

Beyond tooth decay: The Importance of good dental hygiene

We are all aware that poor dental hygiene can lead to tooth decay, gum disease and bad breath . But did you know that not brushing your teeth could also have consequences for more serious illnesses?

Here we discuss the health conditions that are the repercussions of poor dental health.

Research has shown that that there is a link between gum inflammation and Alzheimer’s disease, after an intense study of approximately 20 years.

It is recommended that we should brush for 2 minutes, twice daily. However we tend to become slow as we age and gum diseases increase at the age of 70 for this very reason.

Further research suggests that there is sufficient scientific evidence to show that two of the three gum disease-causing bacteria are capable of motion (or “motile”) and have been consistently found in brain tissue.

If a patient has bleeding gums, the gum disease-causing bacteria will enter the blood stream every time they clean their mouth and even when they eat food.

Porphyromonas gingivalis has found a ways to get directly to the brain, where there are no immune checkpoints. From there, they spread to the brain at their will. In addition, in older individuals, the blood vessels tend to enlarge and become leaky.

“The published work confirmed P. gingivalis placed in the mouths of mice finds its way to the brain once gum disease becomes established first,” Dr. Singhrao concludes. The research has concluded that the chemicals released by the brain’s immune system in response to Porphyromonas gingivalis reaching the brain ‘inadvertently’ damage functional neurons in the area of the brain related to memory.

Gingivitis means inflammation of the gums (gingiva). It commonly occurs because of films of bacteria that accumulate on the teeth – plaque; this type is called plaque-induced gingivitis. Gingivitis is a non-destructive type of periodontal disease. If left untreated, gingivitis can progress to periodontitis, which is more serious and can eventually lead to loss of teeth.

Signs and symptoms of gingivitis

A dentist or oral hygienist checks for gingivitis symptoms, such as plaque and tartar in the oral cavity.

Checking for signs of periodontitis may also be recommended; this may be done by X-ray or periodontal probing.

If the patient is diagnosed early on, and treatment is prompt and proper, gingivitis can be successfully reversed.

Treatment involves care by a dental professional, and follow-up procedures carried out by the patient at home.

Gingivitis care with a dental professional

Plaque and tartar are removed. This is known as scaling.

The dental professional explains to the patient the importance of oral hygiene, and how to effectively brush his/her teeth, as well as flossing

Periodically following-up on the patient, with further cleaning if necessary

Fixing teeth so that oral hygiene can be done effectively. Some dental problems, such as crooked teeth, badly fitted crowns or bridges, may make it harder to properly remove plaque and tartar.

What the patient can do at home

Brush your teeth at least twice a day

Bear in mind that in most cases, electric toothbrushes do a better job than we can do on our own

Floss your teeth at least once a day

Regularly rinse your mouth with an antiseptic mouthwash. Ask your dentist to recommend one.

In the vast majority of cases, if gingivitis is treated and the patient follows the dental health professional’s instructions, there are no complications. However, if the condition is left untreated, gum disease can spread and affect tissue, teeth and bones, leading to periodontitis.

Studies have linked gum diseases, such as periodontitis, to cardiovascular diseases, including heart attack or stroke as well as risk of lung disease.

Fluoride is found naturally in soil, water, foods, and several minerals, such as fluorapatite and fluorite.

What does fluoride do?

Fluoride is extremely useful in preventing cavities and making teeth stronger. However, it is much less effective if a cavity has already formed.

Fluoride also disrupts the process of tooth decay by: 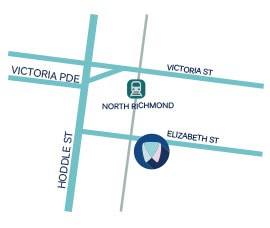